For many years we have been using VoIP (Voice over IP) technology due to the low cost and extensive features. VoIP is perfect for world travelers who want to be able to call friends and relatives from where ever in the world we may roam.

We use VoIP services that allow a standard telephone to route calls over the Internet using a special VoIP adapter. Our old VoIP adapter had been mostly reliable over the years, except for some infrequent issues with calls going directly to voicemail without ringing the phone and trouble calling certain numbers in certain areas of the country. These were minor annoyances, but we wanted to see if there was anything better available, so we decided to take a look.

After finding out that Vonage is currently providing new customers with the V-Portal VDV21-VD at no cost, we signed up.

After a few days the V-Portal arrived.

We had no problems with the install, although we didn’t hook it up as the instructions show. Since we already have a network and didn’t need another router, we simply connected the blue port on the back of the V-Portal to one of the 4 ports on our router LAN.

The V-Portal has its own router for those that don’t already have a network setup. This way you can simply plug the V-Portal into your modem and then plug your computer into the V-Portal and be up and running.

In addition to a built-in one-port router the V-Portal has a decent sized and very bright orange LCD screen, it shows caller-ID as well as the IP address of the V-Portal on your local network and it also allows you to change some settings in the V-Portal. 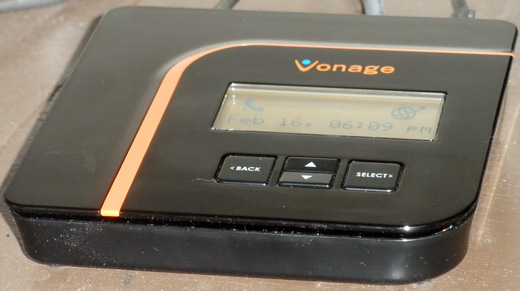 The V-Portal automatically updates its own firmware when it finds a connection to the Internet. It would’ve been nice to know that so we could plug it into a UPS just in case of a power issue. It updated the firmware without a hiccup though. Then it booted up and has been running well ever since.

When we plugged in a phone and made a call the sound quality was perfectly clear even on our older cordless phone that we had previously thought had poor sound quality.

One of the best features about this device is the LCD screen with callerID. We had been thinking about buying one of those callerID boxes like the ones people had when callerID first came out. It’s nice to be able to look at who is calling in the same place every time the phone rings. When we only had the callerID in our cordless phone handsets, we were always running around trying to find a handset to see who was calling. Many times we would rather not answer and knowing who is calling tells us if finding a handset is even worth the effort.

We think trying out the V-Portal from Vonage is worth the effort, whether you’re using VoIP or traditional phone lines, a free VoIP adapter is a great reason to try out Vonage. The Vonage phone service has been very solid so far.

We have not had any more trouble with calls not ringing through and we are now able to reach certain numbers which we had trouble reaching with our last VoIP provider. We will continue to monitor the V-Portal and Vonage phone service quality and performance and will report about the long term reliability and quality here.